Is Physical Media DVD Destined to be a thing of the past? Maybe not quite yet. 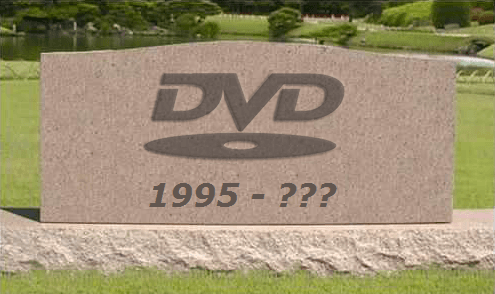 It takes a bit of time for consumers to completely embrace a new technology, even when it comes to their personal entertainment. This, however, wasn’t the case for the DVD, which quickly became the ‘cash cow’ for almost every media company. Sales for packaged media continued to thrive until the introduction of streaming and VOD entertainment, which threatened to take control of home entertainment as we know it. There seems to be a great divided developing between what consumers want and the ability for delivery; and this is showing that there are still quite a few that want the personal ownership of their DVD’s.

It doesn’t seem that long ago that people were going to brick and mortar locations to buy music and movie DVD’s. The internet brought online purchasing, which then catapulted the general public into the acceptance of online viewing. Movie companies have been scrambling to try to make the theatre experience ‘better’ than home entertainment, but when you compare the cost of movie tickets (and the goodies), to the investment of the DVD, it became a no-brainer. The drop in theatre attendance is referred to (by economists) as ‘structural decline’. However, the average movie-goer called it ‘waiting for the DVD/Blu-ray to be released’.

The entertainment industry is an always evolving marketing machine, and with that, there has been an advent of some of the most popular subscription only television shows. These newer in-demand items added another flavor temptation to DVD ownership. Unless you are a member, even streaming is not an option for these hot shows. In the last few years, the subscription cable companies have produced some of the highest rated productions, leaving the standard networks behind in a layer of dust.

Of course, everyone knows the limitations of DVD’s, which include the fact that you can only view them on your home player, a pc or a laptop. This has introduced new generations that are eager and willing to opt-in to VOD and streaming. This group doesn’t have any interest in personal ownership and, part of the immediate-gratification attitude, wants to have the ability to view on a multitude of technologies, including tablets and smartphones. This demand has been a quantum leap for companies such as Netflix and Hulu, which jumped from $0 in 2010 to $3 billion in 2013. Sadly, DVD sales has continued to drop from over $8 billion to a tad over $5 billion for the same period; even with the subscription television show additions. Streaming for music has also shown a 32% increase, which has been an angel-to-the-rescue for the industry.

But don’t toss out your player yet. With the demand for streaming entertainment climbing to a peak, there seems to be a technology hurtle that has yet to be completely addressed. Companies are struggling for the band-width required to stream a complete movie, while consumers are clamoring for more. Just about everyone has accepted the change of the face of the old style brick and mortar store purchase, adopted online purchase and are now ready and willing to receive streaming and VOD. It appears, technology is not quite keeping up with the demand of the masses, and so the personally owned DVD has not yet been abandoned.

When it comes to potential salvaging of packaged media, the marketing gurus are keeping their thinking caps on. They already know that the DVD/Blu-ray situation is in peril, but they also know that there is a market for them. While we wait in the sidelines for band-width to catch up, there are some brilliant plans to address the packaged media audience. There seems to be a continued focus for the subscription television shows (especially the mini-series) and the latest concept from some of the big name movie companies is to add a touch of ‘Premium movies’ as another choice. These would be the biggest box office hits, selectively chosen for the packaged media demand consumer.

Should we expect these marketing venues to produce high rated sales jumps of the past? No, that would be a set up for a fall. Today’s viewers will not achieve the same purchase rate of yesterday’s DVD/Blu-ray sales, but there are some interesting plans at work to try to get to a leveling off point and not continue to drop.

As long as they don’t lose money, entertainment corporations want to give the consumer the ability to have their entertainment in every method possible. For a while, at least, this will include packaged media. As the generational demand and divide makes a shift and band-width problems are no longer a topic, this may drastically change and we will see the DVD/Blu-ray travel down the same path as VHS.

PJ founded Uscreen in 2013 after numerous requests from clients at his previous web hosting company looking for ways to distribute videos securely. Uscreen is PJ's 2nd company. He regularly contributes to the Uscreen blog and enjoys getting his hands dirty in almost every single aspect of the company. He is a firm believer in taking care of every single customer and making sure that both customers and employees are happy.