IGTV and Everything You Need To Know about It

Did you hear the news?

Instagram has brought out a brand new video on demand service, and people are going crazy about it.

IGTV is the first major competitor to YouTube we’ve seen in a long time. And, it’s shaken up the world of content creation as we know it.

But what does IGTV mean for you and your online business? Is it going to play a role, or is it just another social media fad you can ignore?

In this article, we’ll answer all of your major IGTV questions, share our predictions for the platform, and show you how to take advantage of it straight away.

Use the table of contents below to navigate through this post:

What Is IGTV (And Why Should You Care)?

IGTV is Instagram’s video on demand service which rolled out on the 20th June 2018.

Here are 3 main things to know about IGTV:

There are lots of similarities, right?

You can easily see why IGTV is earmarked as a real YouTube competitor. And with one billion users on the platform right now, they’ve got the audience to leave a real dent in the video-on-demand world.

Some smaller content creators, like Twins That Travel, started seeing the benefits of IGTV in the first 12 hours after it launched:

In four years we made four YT videos. I think we averaged at 128 views per vid and gave up. Our first IGTV vid has had nearly 6k views in 12 hours. For the YT-dispossessed, there is hope ?? #IGTV

It goes to show there is an opportunity in this app for creators with a primed-and-ready audience to tune in and start viewing.

The real message of the IGTV rollout isn’t about a giant battle between video content creators, though. The real message is about the future of online business. Let me explain.

What Does IGTV Mean For The Future Of Your Online Business?

I read a great quote from Ryan Holiday the other day. To paraphrase a little, he said,

“The world is constantly giving you feedback; you can either hear it while it’s a whisper, or you can wait until it pins you down and screams it in your face.”

For years the world has been whispering about the power of video:

They were big news at the time. But they were also just gentle nudges in the direction of using video in your business; small signs it was profitable.

The IGTV rollout, then, is the world screaming about video-on-demand’s potential. And it should help you lay any doubts you had to rest. Why?

Because Instagram’s entire plan is to use video-on-demand to increase their revenues.

Co-founder Kevin Systrom alluded to eventual adverts on the platform, and it’s hard to imagine we won’t see their prime advertising real-estate taken up in the next six to 12 months. This isn’t to mention the overall money to be made by influencers advertising within their videos.

Video on demand is becoming a staple of online business, and it’s no longer just for YouTubers, cinematographers or the photogenic. It’s for anyone with a phone, an idea and a handful of people to watch.

If you already run a video on demand business, this is good news. You’re already ahead of the curve, and if you keep growing, you’ll be well positioned to take advantage of this new path IGTV is forging.

But if you’re not now is the time to start.

The longer you wait, the harder it will be to build a following. Much like how YouTube is considered hard for new users, the same will happen to IGTV if you leave it long enough. Strike while the iron is hot!

What’s Going To Happen? Our 6 Predictions For IGTV

It’s easy to get caught up in the excitement of a new product launch. Each one of them is lauded, simultaneously, as “the next big thing” and the “worst thing to ever happen.”

But it’s more important to figure out what will happen when the dust settles. When the hype subsides and the reality of the app kicks in.

IGTV is a competitor for YouTube’s views and traffic, and they might feel a small hit, but they won’t notice a major disruption just yet:

Many of the initial IGTV videos have been prompting to click through to a YouTube video. This is partly because creators have their content stacked up months in advance, but also because it’s unlikely creators are going to jump ship at such an early stage.

IGTV will be a tool in addition to YouTube, not instead of.

YouTube also has the upper hand with OTT apps and streaming. You can get YouTube through your television, in the correct landscape format, which lends itself to many of their top genres like gaming or long-form tutorials.

The standalone IGTV app is following the Instagram model of being a mobile-only app first. It’s also built into the Instagram app so it’s incredibly accessible for it’s users. It’s unlikely people will leave IGTV to go and watch YouTube, if the video is right in front of them.

80% of smartphone time is spent using mobile-friendly apps, and this can go up to four hours a day. If IGTV keeps capitalizing on this market, they will make a dent in YouTube’s traffic.

2. IGTV Will Be A Great Marketing Tool

One of the first questions that popped into people’s minds with IGTV’s launch is whether or not it will allow content creators to monetize their content–which is a great question since YouTube’s content monetization potential has been in question for the past year.

Our answer to that question is probably not.

Because IGTV will be largely focused on advertising when they monetize it, it’ll encounter many of the problems YouTube currently faces. But it’ll also come with the benefits, which is it’s a free area to promote the business and products you run on your website.

We recommend using this as a “top of the funnel” marketing channel to engage your customers (or following), before leading them to your personal online space, where you control your income.

3. IGTV Will Create A Surge In New Video Creators

YouTube can be intimidating for a new video creator.

IGTV allows you to do everything from your mobile and upload directly. While you can add your HD videos from a desktop, if you’re a new creator starting out, it’s as simple as picking up your phone and recording what you see.

The barriers to entry are much lower, and we expect to see a surge in new content from people looking to add video to their business (like you should too).

4. IGTV Will Become The Go-To For Vlogging

It’s not unusual to see long-form stories that go over three minutes in length. This style has also gotten us pretty used to seeing people talk into their phone camera.

But the problem has always been that these stories expire and were not searchable. You either found the content inside 24 hours, or you didn’t.

IGTV removes those restrictions. Vlogs can be created, stored and found through the in-app search engine.

Thanks to the lower barriers to entry I mentioned in the last section, we estimate that IGTV will become the new hub of long-form Vlogging. Pick up a camera, speak and upload. Much simpler and your audience can see it instantly. No need to refer them to another app!

5. Short-Form Tutorials Will Get Great Exposure

Short tutorials of two to ten minutes in length are going to do well on IGTV.

You know, the kind you’re happy to stumble across and watch, but you wouldn’t necessarily go out of your way to find?

You’re happy if this pops up in your news feed, and you might save it for later, but you’re not about to go searching through the database to find it.

The same will happen for thought leaders, too. Lewis Howes has already been taking advantage of this with short how-to videos like, “You are enough” which shared personal development tips.

We guess these tutorials will lead to the longer off-site material, or be more like “micro-content” that keeps you engaged.

06: IGTV Will Become The Go-To For Entertainment

IGTV is going to force YouTube to move more and more into the video search engine side of their business. Bringing them to double down on the biggest database of videos in the world, like Google is for internet pages right now.

That means we’ll likely see a shift to more in-the-moment style entertainment content on IGTV, like Vlogging that you just read about, to ensure they remain at opposite ends of the spectrum.

How To Take Advantage Of IGTV Right Now

They key to IGTV right now is experimentation.

There is no agreed way to use the platform right now, and people are just throwing stuff out there to see what happens.

But there are some do’s and don’ts I recommend you follow to ensure you’re engaging your audience correctly, and the rest is up to you! 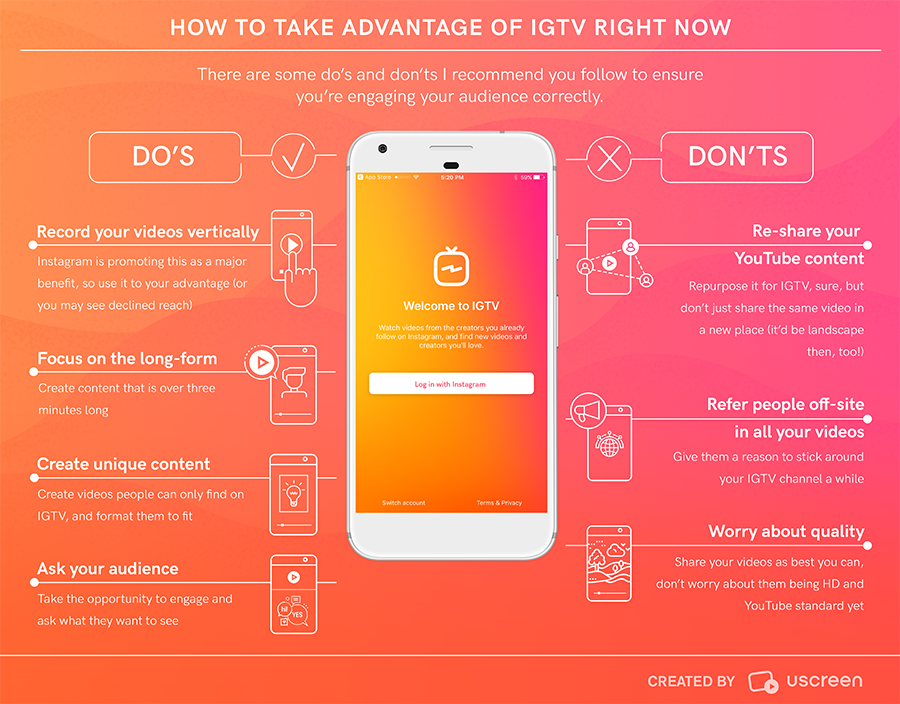 IGTV: What Do You Think?

Before you go, I want to know what you think about IGTV.

Let me know in the comments!