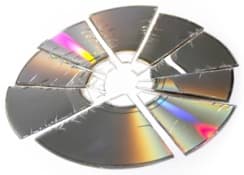 Some of you may be asking, who still uses DVDs? According to this Forbes opinion piece, quite a few people as of 2013. But in our humble opinion, the DVD bargain bins at Walmart have etched the writing on the tombstone of this outdated media format. Sure, you still may find a use for them in 2015 (as a coaster?), but we think that there are better options out there. This is our response to that Forbes article.

You can find statistics that demonstrate the death of the medium across the Internet. Here is what we found.

The Forbes article author said, “Until automakers figure out how to make vehicles rolling Wi-Fi hotspots, airlines open the throttle on in-flight bandwidth, and online outlets decrease download times, watching movie and TV content on disc will remain the best way to travel.”

Actually, they have. Autotrader names several automakers that are answering families’ calls for streaming video in this article. Plus, United Airlines is in the process of expanding its Wi-Fi services and is offering free streaming media to accommodate their customers media preferences. To be fair, these are changes that the airline is making since the Forbes article was written. So, maybe they’ll do an update?

The Forbes author argues that there aren’t quality video options for streaming. Since his article was written, options like “Digital HD” have come out. We believe that it’s safe to say that as people switch to streaming options for convenience, the quality will improve as well.

More and more marketers are looking at how they can leverage the digital (specifically streaming) video revolution. Marketing and media websites emphasize that online video can’t be ignored as a money-making avenue. If the marketers say DVDs are dying, then it’s likely they are.

5. The Last Holdouts Are Moving To Streaming

Uscreen’s customers consist of the fitness, educational, and motivational speaking industries. The Forbes author correctly says that these industries have used DVDs for longer. While he claims these “specialized” industries favor it, the ones that switch are finding they are making more money by offering streaming options (see the stats above).

The simple fact about DVDs is that they take up space – space in your house that could be used for decorating or displaying your chachkies. Why not save space by simply watching the video online (or on your mobile device) when you need to? Also, You can scratch DVDs, which degrades the video quality/playability. When the video is digital/being streamed, the worst that can happen is that it takes a minute to load.

Those are our six reasons that everyone should move on from DVDs, an all-but-dead video format. Learn more about streaming video options on Uscreen’s website.